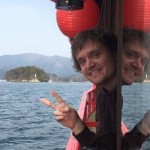 Internationalization Coordinator, Ichinoseki City
Nate has lived in Ichinoseki since 2013, working for two years as an English teacher before beginning work in the city’s ILC Promotion Division in 2015. From Perth in Western Australia, where he worked at the Consulate-General of Japan, he likes early morning jogs through the countryside, photography, the shinkansen and other trains.