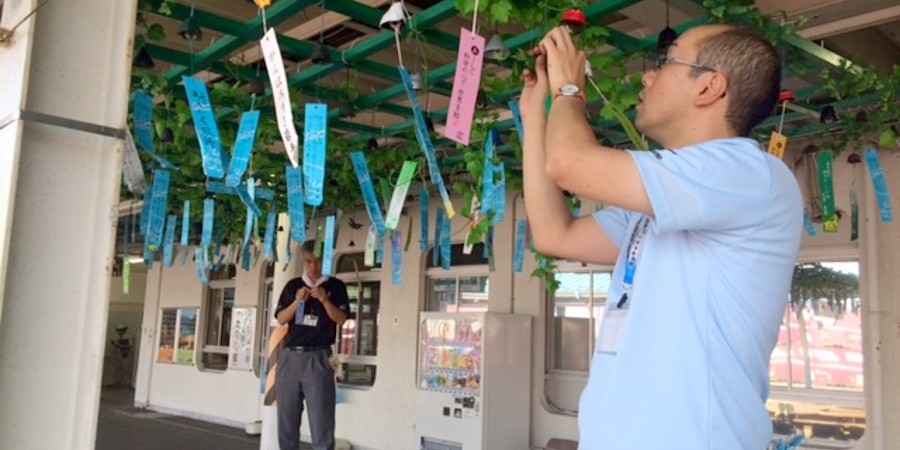 Greetings from Oshu City! You may remember that Oshu City is the northernmost city with the ILC candidate site running through it. (From north to south, we are Oshu, Ichinoseki, and Kesennuma.) I’m looking forward to giving you the monthly scoop on local ILC happenings along with our neighbors to the south!

Recently we’ve had a lot of ILC news centered on local Mizusawa station. First off are the bells. Every summer, Oshu puts up 1,000 Nanbu cast-iron bells at Mizusawa Station, as well as 500 at the Mizusawa-Esashi bullet train station, and more at city hall. This tradition has gone on for over 40 years. According to locals, the jingling of the bells is supposed to make you feel cool. Hmm. There’s only so much the bells can do above 30°, but they are very pretty.

At the Oshu ILC Promotion Division, we decided to use some of the bells to raise awareness of the ILC. First, we printed tags for the bells adapted from messages from ILC-themed “karuta” cards made by KEK. Then, on July 9th, we embarked on Mission: ILC Bells, braving the heat, the pain of craned necks, and the difficulty of choosing the perfect color tag for each bell. The new multilingual space (with free WiFi) at Mizusawa Station

The next big event was the opening of the renewed tourist information area at Mizusawa Station, located to the left of the ticket gate. Thanks to the Oshu City and Oshu Sightseeing and Products Association, this spots has free WiFi service. Often “free WiFi” in Japan means only for a certain cell phone provider, or with a really awkward signing up procedure, but I checked it personally. Look at the English explanation panels on the right wall and follow the instructions. Just join the network, put in the password provided, and go! As you can see on the left, you can find tourist maps, including English maps. Actually, these English maps were made by my division! Besides English, we printed maps in Japanese, Chinese, and Korean. They serve two main purposes: one, to provide information about tourism in Oshu, and two, introduce Oshu as part of the ILC candidate site. There’s a medium-size map showing the candidate site for the ILC, and a short article summarizing the ILC project. We gathered sample maps from the US and Europe to make sure our maps were clear and easy to understand as well as easy on the eyes. These maps are or will be available in places besides Mizusawa Station such as City Hall, local hotels, and more. We printed out lots and want you to use them! Please take one, or five.

At first I was worried about the bells and the maps: what if no one noticed? What if our maps collected dust, sad and lonely? Fortunately, I commute to work through Mizusawa Station and I know for a fact that people are noticing. So far, I’ve seen three people looking through the new maps, and barely managed to repress the urge to take photos of them. Not only that, but when I was waiting for the train last week, a man with a suitcase noticed the bells and started to explain the ILC to his coworkers. Naturally, it wasn’t a detailed textbook explanation, more like “there’s a scientific dealie that might come here and it’s a big deal,” but of course any awareness counts as success.

So the news from Oshu City is that, little by little, we’re making progress, building awareness of the ILC and making our city even more of a convenient place to visit! Please drop me a line if you’re passing by.